We all know that an App Store rating can make or break your game. Publishers think they can’t impact or change scores – but that’s not true. Engaging with players outside of dedicated support channels presents a unique opportunity for gaming companies to promote their game, collect data about player habits and opinions, and direct them toward desired behaviors – especially posting positive app store reviews.

We've also created an infographic to make it convenient to view or share: 5 Ways to Massively Improve Your Mobile Game App Store Rating.Here are the top five ways to improve your App Store rating:

Moderate and Respond to Players’ Reviews on the App Store 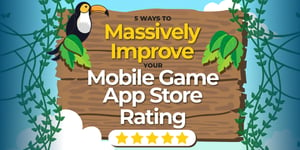 Reviews and ratings are dynamic, and every channel of engagement is an opportunity to turn players into brand advocates that will boost ratings. In our experience, when publishers respond to comments, 46% of the time, players change their scores or feedback to be more positive.

For example, a Goodbay client had an overall customer satisfaction (CSAT) score of 50%. When we isolated a single game dynamic, we found that 1/6th of the comments were about the randomness of the game, which lowered its CSAT to 33%. Having isolated randomness as a significant point of discontent, the company proactively engaged in all public forums where players mentioned the game. Within seven days, the App Review score rose an additional 12% (0.6 / 5 Stars) for all randomness-related reviews. You can change sentiment by merely engaging your players via all available channels.

Monitor and Respond to Social Influence

Player communities extend vastly beyond app stores to platforms like Facebook, Twitter, Instagram, Reddit and Discord chat forums, and more, all of which can have tremendous social influence. Integrating social platforms into your CRM and setting a threshold for product mentions allows you to score players’ social influence and distribute support resources accordingly. Having dedicated staff support these channels as they would a trouble ticket and provide carefully crafted, thoughtful responses can make a significant impact on ratings. Even if support teams can’t solve the problem, merely acknowledging and thanking players for their comments and opinions improves sentiment ratings by more than 13%. When publishers don’t respond, sentiment ratings change less than 1%.

Watch How Much You Bot

Automated mechanisms, like bots, can efficiently respond to questions or complaints but can’t share a player’s enthusiasm or frustration the way other gamers can.

One gaming company decided to test live player support against bot-driven support using two games with identical features and functions. For one title, we provided a trained workforce of gamers to respond to every ticket personally. For the second, AI and automation-driven bots answered 80 percent of tickets. Even though the games were the same, the app store ratings for the bot response title was 7.2% lower, and devastatingly at a 3.9-star app-store rating. That score pushed it below the crucial 4+ stars needed to encourage new downloads.

Know When to Prompt Players to Rate Your App

In the dynamic world of gaming, new promotions, events, or updates happen continually, usually triggering a prompt to the player for an app store review. Knowing when to prompt players to rate an app is critical. After any change, approximately 70% of sentiment will be negative for the first 72 hours.

A common mistake most publishers make is to request an App store rating immediately after these updates, inadvertently driving NEGATIVE reviews to their app. However, once players have had a chance to adapt, learn the new functionality, and communicate with other players, sentiment turns positive.

On average, 95% of gamers are non-paying. Of the 5% who do pay, the top 1% are serious players who drive 80% of revenue. This reality makes it vital to create a vibrant, engaging gaming ecosystem with excellent player support. Taking a holistic approach by proactively interacting with every channel where players reference your product will improve app store ratings and increase customer spend.

Publishers often focus efforts on the top spending 1% at the detriment to the non-paying base players who create the vibrant community and game ecosystem that keeps all players engaged. The non-paying players have social influence and they are usually the most active in communities outside of your game. They drive ratings and buzz about the game – and this influences the top spenders.

Shahani is the CEO of Goodbay Technologies and is based in Chicago, IL. For close to two decades, he has helped digitally disruptive businesses deliver superior customer care. His passion is turning small businesses into international phenomenon – one happy customer at a time! Sapan was born in Bombay, raised in Hong Kong, and educated in the USA (Wharton School, UPenn). After a successful career in strategy consulting, he launched Goodbay with a mission of delivering an intelligent approach to customer support.