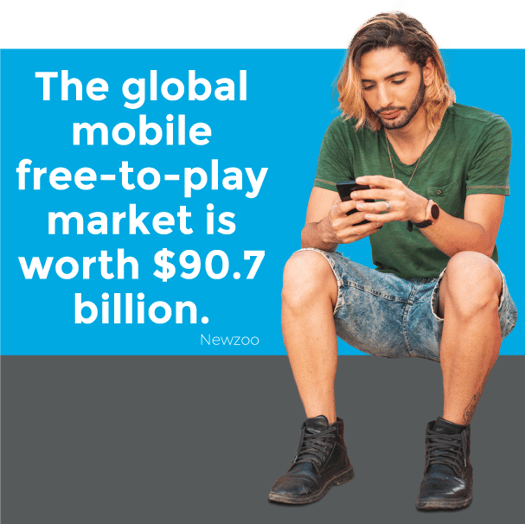 The global mobile gaming market is projected to generate $90.7 billion in consumer spending in 2021, according to Newzoo. Since these games are free to play, you may be wondering how the market became so lucrative. In short, it’s from in-game enticements designed to help players progress past an obstacle, help them achieve a goal or add elements to their game character. Each trinket, skin, outfit, coin and gacha is carefully designed to encourage a player to spend real money through discrete and well-placed microtransactions. Although any given microtransaction typically is small, the sum of them in the aggregate easily covers the initial cost to develop a game – and then some.

The goal of every mobile game publisher is to convert as many F2P players as possible into paying ones. The challenge is knowing how, and when, to attempt to monetize. Who is the right player? When is the right time? What is the right spend level? Here are a few points to consider:

In gaming, there are some players interested in playing a mobile game but not spending real money. These players get similar game content as paying players and are called free-to-play (F2P). In contrast, a paying player regularly purchases in-game bundles, upgrades, tools and other rewards. One-off purchases are great but an ongoing revenue stream is the target, and the intent is always to convert a free-to-play player to a regular spender.

Most games offer skill-based advancement options that encourage both in-game engagement and return play. They also help avoid lengthy grinding. To promote ongoing spending habits, publishers try to find a balance between which perks are available to all players, and which should be set to only paid players. On the surface it may appear as if F2P players don’t generate revenue, but history has proven the spend potential among this audience is large. As a result publishers there are strategies that encourage a F2P player to spend, and the sooner a publisher engages with a new player the better.

The Best Time to Engage

One of the biggest mistakes freemium publishers make is waiting too long before engaging a free-to-play player. It’s important to offer a hook at the right time which typically is soon after download, when a player has been engaged with the game for a while and there hasn’t been any latency. Once a player starts enjoying a game and begins to strive to advance, there’s an ideal opportunity to market to them with informational popups and emails about upcoming sales, bundles and events. This proactive approach meets the player before they disengage. If a publisher waits too long, for example after a player leaves a game and then logs back in, it’s often too late.

Another missed opportunity F2P publishers make is with players that earn a host of free, skill-based upgrades. It’s important to monitor early gamers so that once they earn their first several upgrades, the company begins enticing them with paid upgrades to accelerate game progression. It’s also important to make offers that are so advantageous they’re impossible to decline.

A third mistake is to set upgrade spend levels too high for regular consumers. Most F2P players are casual gamers; they play during brief periods of down time and aren’t committed to learning complex game mechanics or becoming fully immersed. As much as a publisher may want to push ads and upsells to this type of gamer, without the right checks and balances you risk turning off a player before you ever had a chance to win them over.

The Role of Player Support

At the end of the day, taking somebody from free-to-play to paying is a sales process. It’s never a good idea for a freemium player to get the impression that a publisher just wants their money – sales are most effective when a publisher understands a player's challenges and then sells relationally to them.

Player support has untapped potential in aiding the F2P conversion cycle. Too often, support is relegated to simply answering a ticket. Since fundamentally it’s the overall player experience that leads to the potential for in-game spending, when support fails to deliver a positive player experience at the start – from seamlessly connecting to an agent, to that agent expressing empathy for the issue, to a mutual understanding of resolving the situation – you’re at risk of keeping F2P players non-spending forever.

This is where agent education becomes crucial. Agents who know the game have a much greater ability to empathize, deliver the proper tone and, if needed, compensate appropriately. This involves more than problem solving and issue resolution; it’s gamers helping gamers. When a player and an agent have a shared set of in-game experiences, the player feels appreciated and understood. When the same agent offers information about an upcoming event or bundle, the player is much more likely to act on the offer.

When the Price Is Right

Successful conversion is all about catering to what’s most appealing to your players – both F2P and paying. It's important to find creative ways to gather and apply player insights because they often communicate something important if you know how to find it. Look at their activity history, how long they're hovering, which trinkets they accept, etc. If you end up with some people who pay and some who don't, what is it about payers that makes them more likely to spend? What will appeal to each player is something that addresses why they’re playing a game in the first place. A lot of times, they’re playing for stress relief or they’re simply competitive by nature. This type of intelligence can be gathered by the agent at the point of interaction, so it informs intelligent scripting to personalize that player’s experience.

Game publishers often create a one-size-fits-all pricing model so there’s a set price for everything. An alternative approach is graduating players into spending higher tiers over time. For instance, a player that sees a popup and instantly clicks should be treated differently than one who sees numerous popups and never clicks. For the latter, marketing could reach out with a quick survey to understand what it is about that offer that fails to prompt a click. If a publisher sees people that keep clicking but take a long time to purchase, or only buy when something goes on sale, that’s an opportunity to define optimal price points and only offer those. For example, don’t keep offering a $100 pack if it’s cost prohibitive. Instead offer ten $10 packs and you’ll get to the same revenue goal.

In many ways the F2P market is overlooking the hidden revenue potential of player support. By implementing a comprehensive engagement strategy that starts right after a download and continues with the support organization, better communication channels can catch players before they attrite. By personalizing player support experiences and referencing in-game behaviors, agents can recognize where that player might be stuck or how much they’ve spent on the game to-date. A simple script change can offer a note of appreciation for playing the game and, if they’re a valuable player or a player carrying a balance, let them know how much is in their account. This form of relationship management is highly effective across all players and their spend levels.